The Triplets of Belleville is one of my favorite movies.


Last month, I was discussing it, and one of my first thoughts was, "It should've won Best Animated Feature. It's absurd that it lost to Finding Nemo.

"To me, Belleville is a work of purest cinema, and Nemo is a jumble of chase scenes, stock characters, and witless banter. Why, it's offensive to even list them in the same category!"

And then I realized, "Wait, they're not only different categories, they're different species! They have nothing to do with one another!

"Discussing Belleville makes me spite an irrelevant movie. I'm the one who brought Nemo up, in the first place. Why am I getting upset?"

Finding Nemo offers ninety-eight minutes' worth of reasons to dislike it--but resenting it because someone on TV liked it more than another movie that happened to premiere the same year...well, that's not sane.

So fuck the Oscars. And the Pulitzer Prize. And any award that turns creativity into a competition.

But there isn't a best work of art.

The only people warring on Christmas...

...are the ones trying to put Christ back into it.

I wish them a happy holiday, and to all my fellow heathens: merry Christmas!
Written by Unknown at 4:07 PM No comments:

Email ThisBlogThis!Share to TwitterShare to FacebookShare to Pinterest
Labels: Personal

Every story, Frank Daniel theorizes, is about someone who wants something badly, but has trouble getting it.

That “someone” is called a protagonist, and what he wants is called an objective. The story ends when the protagonist either succeeds or fails to achieve the objective, and we’re satisfied with the result.

David Howard and Edward Mabley add that “protagonist and objective are so closely identified in our minds that it is impossible to consider one without the other.”

Their relationship is symbiotic because of us. We know Dorothy Gale because, in the Wizard of Oz, she wants to return to Kansas.

From her perspective, sure, returning to Kansas is important, but it’s only one of a billion goals she’ll have in her lifetime. Maybe she aspires to overturn Roe v. Wade. It’s not impossible--she’s from a red state. But if it’s true, we wouldn’t know it, because it doesn’t affect her objective, so we don’t even think to ask.

That’s how important the bond between the protagonist and the objective is. We like watching someone rise to a challenge so much that we’re willing to ignore everything else. The more ardently a protagonist pursues her objective, the more invested we are in the story.

In the Wizard of Oz, the protagonist and her objective are inextricable. If Dorothy isn’t in the story, we can’t root for her to get back to Kansas, and if Dorothy doesn’t care about getting back to Kansas, then we don’t care either, and there’s no reason to watch the movie.

Not for too long, of course. If the protagonist is missing for most of the story, then he doesn’t really care about achieving his objective, and we’re likely to get bored. But if a protagonist goes dormant, another character can pursue the objective in his place.

There are three effective ways of transferring the objective between a dormant protagonist and his surrogate.
Read more »
Written by Unknown at 8:01 PM 2 comments:

These are Sesame Street characters, but the image of Muppets arranged in a mass grave feels apropos.

I haven't seen the Muppets, but I read an early draft of the script. I regret to say that I appreciate the Muppets on a deeper level than Jason Segel and Nicholas Stoller.

I didn't make it all the way through--it was too painful--but I counted a whopping total of three jokes in the first act: on pages ten, sixteen, and twenty-one. There's a fourth joke on page twenty-five, if you count the phrase "freedom fries" as a joke.

Without exaggeration, there are more non-sequiturs than jokes.

For some reason, it keeps insisting they're puppets, not animals.

The Muppets, who are perennial underdogs, spend the first act being rich, successful, and wholly unsympathetic.

The best part is when they sing a great song from another Muppet movie.

It relies heavily on the beat where there's shitty writing, and a character breaks the fourth wall to acknowledge how shitty it was. The trailers were full of this, too.

There's a parody that fails so thoroughly that the script feels obligated to name the original work in parenthesis.

There's a speech about how the Muppets lost their relevance because they're too wholesome. Kids today want violence. (Henson took up puppetry so he could blow up his characters.)

It's great that this is drawing interest back to the Muppets. I cherish the franchise. But it's heartbreaking to see them handled so poorly. And I'm in pretty good company, here.

Grist for the mill.

MY GRANDMA
I wish you heard the conversation those people were having. It could go in a script.

ME
What were they talking about?

MY GRANDMA
Not a fucking thing.
Written by Unknown at 10:20 PM No comments:

The planet Krypton was gonna explode. Two scientists put their baby in an escape pod and shot him into space. The baby landed in Kansas, and he was raised to be Superman, an American icon.

Red Son takes place in an alternate reality where Superman's escape pod was launched a few hours later. It's small difference with major ramifications: he landed in Stalinist Ukraine, where he was raised to be a communist icon. 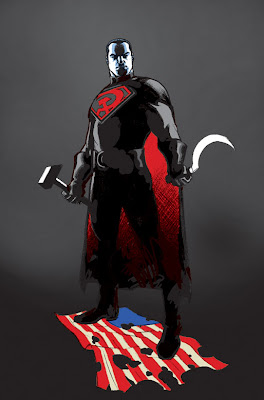 I love that. What a simple way to subvert a quintessentially American character!

And it's a pretty different world. Instead of being a ruthless capitalist, Lex Luthor is the world's smartest scientist. And he's married to Lois Lane. And Jimmy Olsen works for the CIA, instead of the Daily Planet.

Interesting! Why did Superman's Soviet upbringing cause Lex to pursue more academic endeavors? How could Lois fall in love with an emotionally negligent supervillain? What idiot allowed Jimmy Olsen in the CIA?

Unfortunately, writer Mark Millar doesn't explore the ripple effect of his premise. The characters' names are familiar, but the characters, themselves, aren't.

Luthor has been depicted as a machiavellian CEO for thirty years, but in Red Son, he's an evil Mr. Fantastic. This change in personality is never explained. Millar might as well have written him as a polar bear.

And with that, Red Son's great premise is squandered.

If you're not gonna compare the realities, then it shouldn't be an alternate reality, to begin with. Take pride in the fact that you're telling an original story, and don't get distracted with cameos, allusions, and general fanservice.

I'm disappointed that I have to write this down. Like, it's a good theory, but it feels a little like saying, "If you're producing a movie, you should make sure there's stuff for the audience to look at on the screen."

Written by Unknown at 3:17 AM No comments:

My ex's boyfriend entered this video to win a scholarship to his college.

Where he's pursuing an AA in Engineering.
Written by Unknown at 9:38 AM No comments:

Email ThisBlogThis!Share to TwitterShare to FacebookShare to Pinterest
Labels: Friends

My friend, Jae, posted a quote.

“'I think, therefore I am' is the statement of an intellectual who underrates toothaches. 'I feel, therefore I am' is a truth much more universally valid, and it applies to everything that’s alive. My self does not differ substantially from yours in terms of its thought. Many people, few ideas: we all think more or less the same, and we exchange, borrow, steal thoughts from one another. However, when someone steps on my foot, only I feel the pain. The basis of the self is not thought but suffering, which is the most fundamental of all feelings. While it suffers, not even a cat can doubt its unique and uninterchangeable self. In intense suffering the world disappears and each of us is alone with his self. Suffering is the university of egocentrism.”

I like it, but how do we know that we’re not exchanging, borrowing, or stealing pain in the same way that we exchange, borrow, and steal ideas?

Touché. I guess it depends on if you buy into Orwell's theory that "the only thing you can desire in relation to real pain is that it will stop," to the extent of sacrificing even those you love to escape it. But that centres around a view of humans as inherently egotistical & solipsistic, & unwilling to ever deliberately take on legitimately awful pain for those they love, which I personally am quite sceptical of.

Also, I suppose that one could argue that pain only exists when we are conscious of it. An idea can start to sustain itself, if written down or transmitted to enough people, but pain can only be present to you when you are experiencing it directly. Any indirect form of it is once-removed, & therefore maybe not actual pain? Anyway, I don't think I'm making any sense.

I don't know if she's making any sense, but I'm getting a headache trying to figure it out.

Email ThisBlogThis!Share to TwitterShare to FacebookShare to Pinterest
Labels: Friends

I used to cry because I had no shoes...

...until I met a man with no feet. He laughed at my pettiness, which improved his mood, and he went on to have a nice day, but I still had no shoes, so now I cry twice as hard.
Written by Unknown at 6:11 PM No comments:

Email ThisBlogThis!Share to TwitterShare to FacebookShare to Pinterest
Labels: Personal

@ENKEsq
Not saying we should, but if we fused English and Hebrew into a new language, palindroms could be read from left-to-right AND right-to-left.

I get pissy at having so few followers.

@ENKEsq
If I've followed you and you haven't reciprocated, it's fine. Maybe you'll read my English-Hebrew Palindrome joke WHEN IT WINS A PULITZER.

@PulitzerTweets
(re-tweets me)
If I've followed you and you haven't reciprocated, it's fine. Maybe you'll read my English-Hebrew Palindrome joke WHEN IT WINS A PULITZER.

[MY FRIEND]
How will the people who aren't following you read your spite?

@ENKEsq
They'll see it when my People Who Aren't Follwing Me joke wins me MY SECOND PULITZER.


@PulitzerTweets does not re-tweet this.

@ENKEsq
@PulitzerTweets re-tweeted my first Pulitzer joke, but not the second. Fine. Maybe they'll re-tweet it WHEN IT WINS AN EMMY.

Written by Unknown at 6:16 PM No comments: